2017 State of Small Business in a Word: Upbeat

2016 will be a year to remember. It was a year of business changes, social dilemmas, financial scandals, and political upheavals such as Brexit and the U.S. Presidential election. For many people, 2016 is one they are happy to say goodbye to and are eagerly ready to user in a new year. Perhaps those most looking forward to what's in store for 2017 are small business owners. No matter which side of the political fence you sat on in 2016, as we begin 2017 and the political leadership torch is passed there is a sense of optimism in the state of the small business.

Confidence in a Brighter New Year

Although the economy can be measured by various economic metrics, gross domestic product (GDP) is one of the primary indicators used to gauge the health of a country's economy. GDP was off to a slow start in 2016 at under 0.08% in the first quarter of the year, but rising to 1.2% in the second quarter, and jumping to 3.5% in the third quarter (third revision) according to the Bureau of Economic Analysis.

But perhaps the biggest leading indicator for the small business is consumer spending. According to the 2016 Cox Consumer Pulse on Small Business, nine out of ten consumers shop small at least once per week and 42% of consumers frequent small businesses three or more times per week.

As 2016 came to an end, American shoppers continued to drive growth in the third quarter, while business spending was less of a drag. Year-end purchasing is estimated to help the fourth quarter results. Consumer confidence hit a nine-year high in September and, according to the Conference Board's December 2016 consumer confidence survey, the index posted another gain from November which stood at 109.4 to December at 113.7 points.

At Ascentium Capital we saw a bright year end too, reporting $898.5MM in funded volume for 2016, representing a 28% increase over 2015 and setting us up for an optimistic year ahead.

Although we may still see some caution in the early days of 2017 as people take a wait and see approach to President Trump, early indications are upbeat in the small business sector. Along with the rise in the market as we enter 2017, and anticipation for business-friendly changes, consumer confidence will play a big part in small business optimism.

That consumer confidence seems to be contemplated in some of the early reports out such as Kilinger's economic forecast which calls for strong consumer spending to be a main pillar supporting the economy in 2017. In addition, the National Federation of Independent Business (NFIB) released their monthly Index of Small Business Optimism in January 2017 showing optimism has skyrocketed; reaching 105.8, and increase of 7.4 points. "Expect Better Business Conditions" led the findings, followed closely by "Sales Expectations" and, what we like to see in our business: "Good Time to Expand." 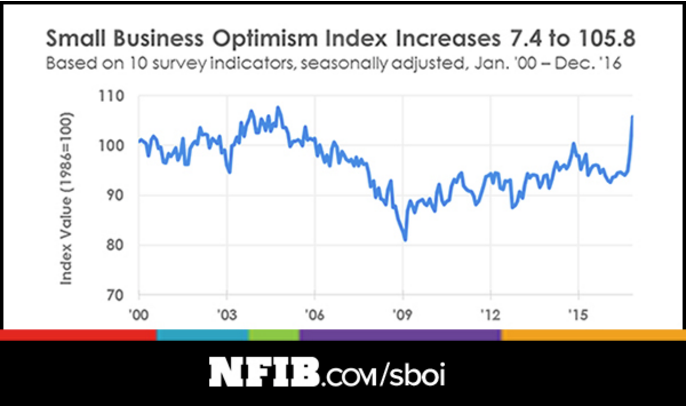 This upbeat sentiment is also reflected in the January 2017 Monthly Confidence Index for the Equipment Finance Industry. The index tracks a qualitative assessment of the $1 trillion-dollar equipment finance sector. With the uncertainty of the presidential election and congress removed, the findings were as follows:
And according to the same Equipment Leasing and Finance Foundation report, this level of optimism has not been seen since early 2008. 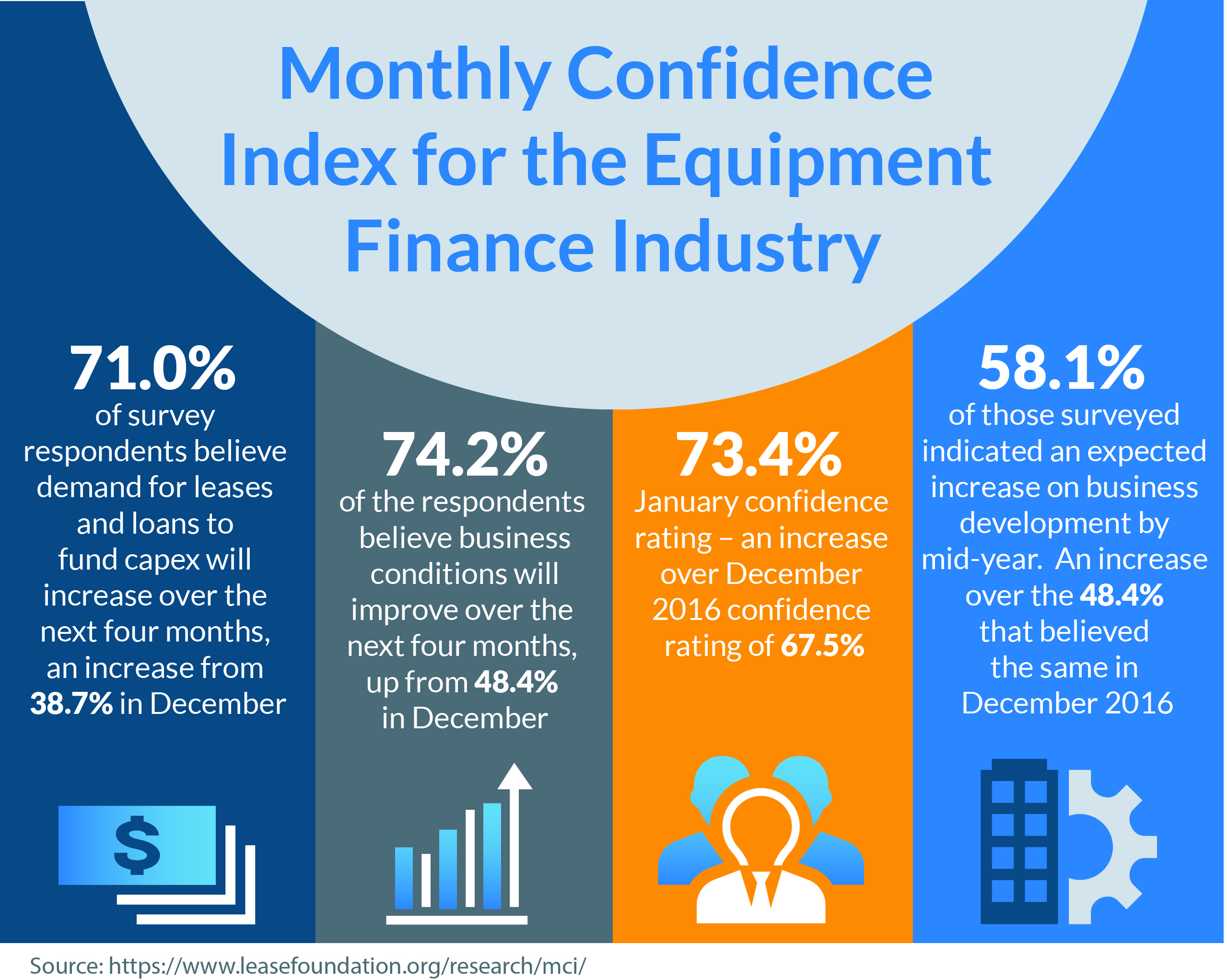 SMB Expectations for Growth Through Investment in 2017

The U.S. economy relies on the consumer to fuel and support growth and, as pointed out, consumers do shop small businesses. The ability for small businesses to attract, interact, and deliver to the consumer is directly related to how they build their business. Additionally, as the NFIB points out "good time to expand" is a leading indicator for SMBs right now and a forerunner of growth. This has set up 2017 as a potentially good year to invest in your business.

For entrepreneurs pursuing a business idea, or an established business investing in expansion or its financial strength, equipment financing, leasing and business loans are often sought out and can be critical to maximizing growth without taxing their bank accounts.

Crowdfunding is a new source of capital raising started in 2016. The regulation allows up to $1 million in debt or equity in a 12-month period from individuals. Although this may be a vehicle for some, the more traditional lending vehicles such as bank loans or lease financing is the primary route most SMBs take. According to a July 2016 release from the National Small Business Association, of the three quarters of all SMBs that require outside funding sources, 73% of small firms used financing in the last 12 months. Without access to capital, growth can falter.

In 2017, with the focus on economic growth, we expect to see a rising number of business loan and lease financing applications. One of the critical areas of financing is for acquiring equipment. According to the Equipment Leasing and Financing Association (ELFA) growth in investment in equipment and software is expected to accelerate slightly in 2017, growing at a 3% rate. With expectations for business growth, the political objectives favoring an acceleration in the economy, and consumer confidence climbing, the SMB has good reason to be upbeat.

******
If you're looking to invest in your business for the future, Ascentium Capital can help. We specialize in helping SMBs with all their major business investments – from business software and office equipment to commercial vehicles and heavy machinery – to get your business in motion. Contact us today!