She Means Business… and the Numbers are Hard to Ignore

October is Women's National Small Business month and a great time to reflect on the historical and recent accomplishments of women in the business world.

If we take a look back just 50 years, to 1969, the country was in the middle of a large and yet to be realized transformational shift. The country knew we were fighting in Vietnam and with a collective-held breath, we watched as the space race was at full throttle with Apollo 11 landing on the moon that summer followed quickly by Apollo 12. Women were being accepted into ivy league schools for the first time when Princeton and Yale opened their doors. And, the first baby boomers were hitting the workforce in droves sending unemployment to a low of 3.7% – a level that we finally hit again in 2018.

With those political and cultural shifts in play fifty years ago, social transformation would be expected. Women still had a few years to wait before they could apply for a credit card; never mind a mortgage or business loan without a husband's (or male) co-signature. In 1972 Helen Reddy released the hit I Am Woman, that became an anthem for women and is still relevant today. She sang this song a full two years before women could get that credit card on their own. Let that sink in for a moment – 1974 was the year for the Equal Credit Opportunity Act. We were squarely in the midst of a second major shift for women fifty years ago that was fighting the domesticity that the country had returned to after World War II.

Fortunately for our country, and our economy, that day came. When it did, it opened more doors of opportunity for a woman with a desire to own her own business. Largely, she was still considered a homemaker until that time and very few dared to dream for more.

Fast forward fifty years . . . and now She means business! Women today have not only become better educated, better paid, better represented in politics and hold better positions in corporate America – but women have become business owners in a big way. The U.S. Census Bureau only started tracking women and minority owned businesses in 1972 but we can estimate there were fewer than 400,000 women-led businesses in the U.S. based on the trend line. That number expanded to 12.3 million by 2018 and continues to grow.

In a shift from past motivations, women today are most likely to establish their business based on a passion versus out of necessity. That motivation is also a key driver for success. It's not surprising that almost half of these female entrepreneurs were born just before or during the woman and minority revolution described from the 1960s.

That feeling of empowerment is also very strong for minority women business owners. While the number of women-owned businesses grew 58% from 2007 to 2018, firms owned by women of color grew at nearly three times that rate. This rate of growth since 2007 is unmatched. Importantly, minority women-owned businesses employ 2,230,600 people and generate nearly $387B in revenues. This growth is vital for our communities throughout the country.

The breakdown of women of color who own business, according to the 2018 State of Women Owned Business report (total 5.8 million): 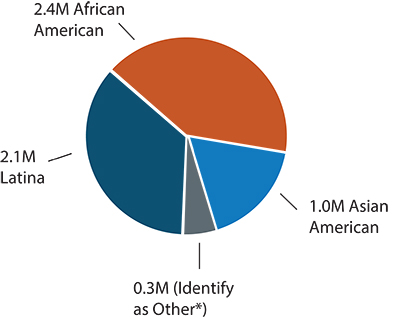 From the successful rise of women business owners to date, we know She Means Business. Tremendous strides have been made. Women's business performance, job creation and economic outlook are on similar trends with their male counterparts. And although women's access to capital—from small business loans to support for entrepreneurs in the venture community—has been traditionally more difficult to secure, there is hope there too. We will be exploring the rise in non-traditional financing to fuel the growth for these women business owners and entrepreneurs in our next installment during National Women's Small Business Month.

Ascentium Capital provides flexible financing programs for women-owned business that they may not have been able to use in the past. Our easy financing puts your business plans—and ideas—into motion.