As we head into April, we wanted to reflect on 2017 and the roller coaster ride many experienced during first quarter of 2018. They say March enters as a lion and exits as a lamb. This March may have been turned on its head.

First, let's take a step back. If 2016 was a year to remember, 2017 was a year that we won't forget. We saw a continued political divide in the country, real estate markets booming, North Korea monopolizing headlines, and on the business front, 2017 was a big year as well -- making headlines with the stock market soaring to all-time highs.

We didn't seem to miss a beat over the holidays, hitting new highs in the stock market that continued the first week in January with the Dow breaking 25,000 for the first time after strong jobs growth and Nasdaq seeing record closing highs. As a matter of fact, economic points from the rise in IPOs, to better earnings reports from companies, to strong economic growth globally all contributed to a surprisingly strong year.

So, will that trend continue?

In November 2017, Goldman Sachs analyst Charles Himmelberg and his team stated they expect the global economy to grow 4% in 2018 for several reasons, including strong growth momentum, easing financial conditions, global monetary policy remaining highly accommodative by historical standards and the likelihood of fiscal stimulus in the U.S. And, that tone of economic optimism is being reiterated from many sources.

We entered a Golidlocks Economy in 2017, with a good balance or ideal growth rate, that continued into 2018. The Gross Domestic Product (GDP) is expected to remain between 2-3% and unemployment is forecast to continue at a natural rate, or about 4-5%. Neither inflation nor recession. The porridge is just right.

March 2018 saw political moves that made an unforeseen impact in the markets with dramatic falls of 724 and 425 on two days in one week after Trump signed an executive memorandum that would impose tariffs up to $60 billion on Chinese imports. As of entering the last week in March, however, the market is still over 3,000 points.

Near term outlook has changed for the overall economy, but how does that play out for Main Street USA during 2018? In late January the central bank district was calling for a 5.4% GDP gain, however, it released a reading March 21 for its widely followed GDPNow tracker which shows it reduced that projection down to 1.9% for Q1. This is on par with the 2% we have been seeing with the recovery.

As The Conference Board pointed out in mid-March, for Q1 and full year 2018, “The business environment for this year and next still looks bright, especially because the labor market created more than 200,000 jobs per month over the past six months.” We need to look at what 2017 brought to the economy to see how the factors play a part in the different outlooks we gathered for 2018.

In the Q4 2017 Vistage CEO Confidence Index SMB CEOs voiced the most optimistic economic outlook in 14 years based on expectations for strong hiring, business investment and earnings outlook.

The Private Capital Access (PCA) Index report from Dun & Bradstreet and Pepperdine Graziadio Business School shows strong small to medium sized business (SMB) results for 2017 and optimism for 2018. The quarterly report compares economic factors on a quarter over quarter basis and the fourth quarter 2017, the results show strong expectations for 2018 based on:

NFIB Research Foundation has collected Small Business Economic Trends data with quarterly surveys since the 4th quarter of 1973. NFIB reported that 2017 was the strongest year ever in the history of the survey with data showing the average monthly Index for 2017 at 104.8, over the previous record of 104.6 set in 2004. 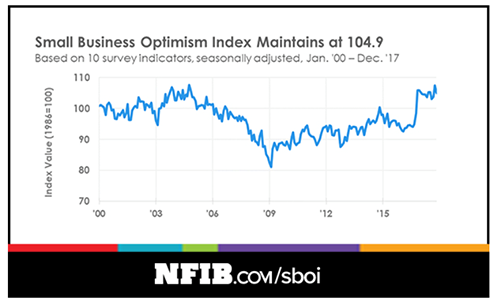 The Equipment Leasing & Finance Foundation (ELFF) released their latest assessment in mid-January that also pointed to growing confidence. The January Monthly Confidence Index (MCI) stood at 75.3, up from 69.4 in December 2017. This is the highest mark set over the last two years. ELFF shared survey results from business executives from primarily banking and independent segments, that showed optimism for:

ELFF shared their MCI chart below and additional comments on the survey results. 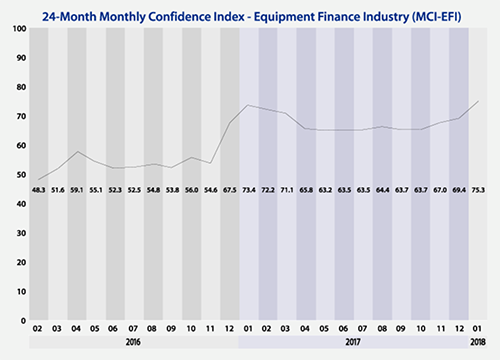 With the recent tax overhaul approved in December, SMBs that were considering investments to grow and expand their business will be in a better financial position to approach a lender, like Ascentium Capital, for fast, flexible financing or leasing options. By capitalizing on business ideas during an economy like this, SMBs are able to take advantage of the steady economic confidence and set themselves up for a bright future.

Ascentium Capital has provided businesses with nearly $4 billion in capital to allow SMBs to accelerate growth and follow their expansion dreams. If you're looking to invest in your business for the future, Ascentium Capital can help.

Fill out our quick contact form and a finance manager will be in touch shortly.

Leave a Reply
Newest on top Oldest on top
Load more comments
Thank you for the comment! Your comment must be approved first

Your email address will not be published. Required fields are marked*