What would you think of a 14-hour light bulb? Probably not much, but that was the length of time Thomas Edison's bulb lasted – which in 1879 equaled the duration of burning 30 candles.

Today, lights are something you might not think much about – you flip on the lights when opening your business, and the last one out shuts them off. Some office buildings even leave "night lights" on; a certain level of lighting that is less than during work hours but doesn't plunge your business into total darkness. But did you know that energy used by lights alone can be 20-50% of your electric bill? Upgrading your business to light emitting diode (LED) lights can be a powerful savings tool that you shouldn't over look.

Most small businesses look for ways to run their business more efficiently – cutting costs where operationally able, carefully thinking through investments, and automating certain processes. Other items, like light bulbs, are not considered a big ticket savings tool and would be more in line with changing types of copy paper . . . just not enough to make a difference. That thinking, however, could cost you. Converting to LED lights will reduce your businesses electric bill now – and for years to come.


The evolution of the light bulb

For many years, the typical incandescent light bulb had been king. Next came halogen lamps – but the problem with this type of light bulb was the same: relatively fragile filament and short lifespan. The short lifespan is part of what converts what is inexpensive to purchase, into expensive to use.

Fluorescent lamps became the business lighting choice, but the long tubes were best for overhead lights and did not work with traditional lighting fixtures. This issue was fixed with compact fluorescent lamps (CFL) in the 1980s – but they were relatively expensive first, and still big, making conversion difficult. They were, however, more energy efficient – using 75% less energy and had a lifespan of 10x longer than the original. According to the Small Business Administration, replacing just one 100-watt incandescent with a 32-watt CFL could save approximately $30 in energy costs over the lamp's life.

The real breakthrough came with LED lighting which had made it's initial appearance in consumer products by the end of the 1970s and early 1980s. LEDs were making advancements and entering the market at this time in a small but promising way.


LED has become part of our lives


LED with it's brilliant color, ability to display high resolution, and cost effectiveness, has crept it's way into many areas of our life beyond the display light in computers and other devices. Many business related signs use LED lights already such as Exit and Open signs, digital billboards, custom business signage, and the like. And it's all around us in our everyday life in items such as televisions, traffic lights, and the tail lights of cars. You may even have LED lights in your business today or see them at live shows or sporting events and not even realize it's LED.

The innovation we are seeing today in visual displays will further LEDs usage and accelerate its place in the business setting.


Lighting your way to savings

There's a bright future for LED lighting. What started as small indicator and display lights in red and green has grown – in a rather short period – into a viable lighting option for homes and businesses. Why? It stemmed from the 1994 invention of blue diodes, with white diode lighting following close behind. The breakthrough of white LED light changed the applicability for standard lighting.

Between 2008 and 2013, the cost of LED bulbs fell by 85%. This was a dramatic shift in the industry and drove accessibility as a mainstream option and long term cost effective lighting solution. Whether you're relying on incandescent, halogen, fluorescent, or CFLs, a shift to LED lighting could light your way to savings.

Let's look at the savings of LED lighting: 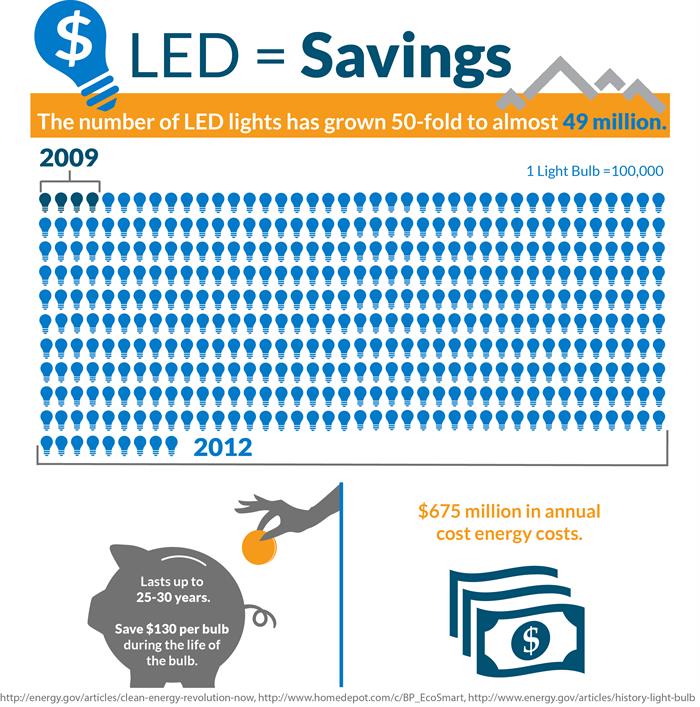 One futuristic idea that will become important for businesses, is integrating an intelligence aspect to these LEDs. Smart lights, relying on microcontrollers, can detect the natural sunlight in a room and adjust accordingly. Or sense darker areas that need more light. This can work throughout the day, and for larger buildings, continually adjust across the office as the sun moves across the sky.

Small businesses converting to LED lights benefit from not only lower power costs, less maintenance, and doing the environment a favor, but may also find employees more effective and happy. Many employees complain that fluorescent lights bother their eyes, but LED offers less eye strain given the nature of the light. And they don't give off UV radiation – another plus for employees.

Today, the costs associated with retrofitting your business are starting to become very reasonable with $5-$10 per LED light versus $2 per CFL. For small businesses you can now weigh the return on investment (ROI) in number of years – more than half of where the ROI was just a few years ago when LEDs were $20-$30. A Forbes article in 2015 forecast this trend to continue with prices expected to drop close to or on par with CFL bulbs, along with delivering higher efficiencies, in just five years.

As prices continue to fall, and energy rebates for conversion in some areas are offered – that ROI may start to pay off even sooner to offer small businesses a brighter, more cost-effective, and energy- conscious future.

Small businesses can shine a light on energy and cost savings. Investing in retrofitting your business with LED lighting options can help you run more efficiently – and Ascentium Capital is here and ready with competitive financing to make it affordable.

Contact us today to learn how Ascentium Capital can help brighten your business's future.